The Ancient Power of Chanting (Mantra) Validated by Modern Science

I love chanting mantras, and I do so daily as an integral part of my kundalini yoga practice. I don't need to know the specifics of how it produces a calming and sometimes even transcendent effect on my consciousness, but I've always been deeply curious about the mechanisms that may be at play beneath the surface of my awareness.

This is why I am both deeply grateful and amazed by the work of John Reid, the UK inventor of the cymascope -- a technology that renders sound visible. In an article published on his website titled, "Cymatics -- A Bridge To the Unseen World," John and his wife Annaleise reveal facts about sound that are simply mind-blowing and worthy of far greater dissemination.

First, did you know that sound is actually not a wave but spheroidal phenomenon? In their words:

"Before looking at cymatics more closely let us dispel the popularly held misconception that "sound is a wave": It isn't. All audible sounds are, in fact, spherical in form or spheroidal, that is to say audible sounds are sphere-like but not necessarily perfectly spherical. For the sake of simplicity we'll call these spheroidal sound spheres "Sound bubbles."

Take a look at the ultrasound beam produced by dolphins: 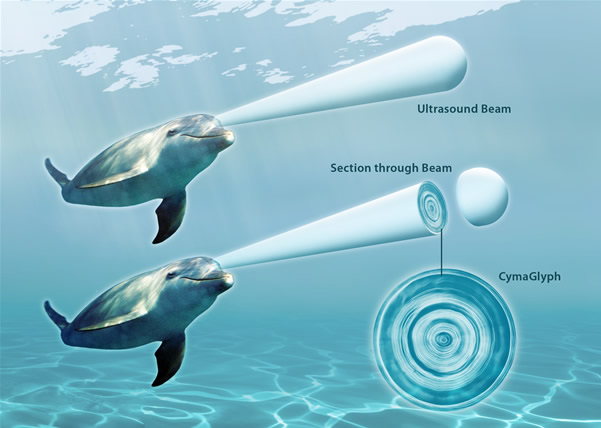 As you can see above, the sound is not produced in wave form but as a spheroidal beam. If you were to slice horizontally into the beam and look at the cross section it would appear to contain geometric patterns that contain a type of cymaglyphic information analogous to hieroglyphs. In other words, these sound structures carry information as real and meaningful as words do in human language.

John's dolphin research using cymatoscope has revealed groundbreaking information about how dolphins communicate and "see" with sound. If you are interested, you can drill deeper into this discovery by reading his landmark paper published in the Journal of Marine Sciences: Research and Development titled, "A Phenomenon Discovered While Imaging Dolphin Echolocation Sounds."

John and Annaleise go on to explain one of the most amazing facts about the 'sound bubbles' that we produce, which I find most compelling in connection to many powerful experiences I have had with mantras, both listening and reciting them, in the yoga tradition:

"Our world is teeming with beautiful holographic sound bubbles that envelop us in shimmering patterns of acoustic energy, each bubble rushing away at around 700 miles an hour as new bubbles form from the source of the sound. Whether the sound is emitted from your voice or from some other source, such as a musical instrument, this 'bubble-in-a-hurry' leaves a fleeting vibrational imprint on the surface of your body: every cell in the surface tissues of your body actually receives sound patterns from the bubbles that surround you."

Did you get that? When we speak or chant, we are producing sound bubbles that attain speeds of 700 miles per hour. But it gets better. Check this out:

"You create infrared light even when you speak...The atoms and molecules of air within this expanding bubble are bumping into each other, each collision transferring your voice vibrations to the nearest atom or molecule. As these 'bumps' occur they cause infrared light to be created due to the friction between the magnetic shells of the air particles. The infrared light carries with it the modulations of your voice that rush away at the incredible speed of 186,000 miles per second. Unlike the sound of a voice, which becomes inaudible after about one mile, the infrared light created by your voice rushes out into space where it travels for eternity, carrying your words or songs to the stars.

Thus, there is a direct relationship between sound and light and in fact there can be no light in the Universe without sound because light is only created when atoms collide with each other, and such collisions are sound. So light and life owe their existence to sound."

What I find so amazing about this is that kundalini practitioners have long made claims about the power of mantra to connect us to the universe that on the surface may appear like pseudo-science. But the science that John Reid is speaking to -- the actual empirical phenomena -- now lends scientific support to at least some of these claims.

Here is Yogi Bhajan, founder of the American tradition of kundalini yoga, making statements that make more sense in light of the mechanisms discussed by John Reid:

"Every element of the Universe is in a constant state of vibration manifested to us as light, sound, and energy. The human senses perceive only a fraction of the infinite range of vibration, so it is difficult to comprehend that the Word mentioned in the Bible is actually the totality of vibration which underlies and sustains all creation. A person can tune his or her own consciousness into the awareness of that totality with the use of a mantra. By vibrating in rhythm with the breath to a particular sound that is proportional to the creative sound, or sound current, one can expand one's sensitivity to the entire spectrum of vibration. It is similar to striking a note on a stringed instrument. In other words, as you vibrate, the Universe vibrates with you."

"What is a mantra? Mantra is two words: Man and tra. Man means mind. Tra means the heat of life. Ra means sun. So, mantra is a powerful combination of words which, if recited, takes the vibratory effect of each of your molecules into the Infinity of the Cosmos. That is called 'Mantra.'"

"By vibrating in rhythm with the breath to a particular sound that is proportional to the creative sound, or sound current, one can expand one's sensitivity to the entire spectrum of vibration. It is similar to striking a note on a stringed instrument. In other words, as you vibrate, the Universe vibrates with you."

"Mantras are not small things, mantras have power. They are the mind vibration in relationship to the Cosmos. The science of mantra is based on the knowledge that sound is a form of energy having structure, power, and a definite predictable effect on the chakras and the human psyche."

We live in a remarkable time where what was once purely the stuff of myth, and considered magical thinking and "woo" by skeptics the world over, is starting to receive validation through the 'hardest of sciences.'  For instance, the concept of the body radiating light is now also accepted through the discovery of biophotons which we reported on in a previous article, and even the ritual of burning medicinal herbs sage to 'ward off evil spirits' like has been found to have powerful cleansing properties.

That said, the most powerful way to understand information like this is to experience it directly. I encourage readers to experience the tradition of mantra directly. Listen or recite them, and visualize the sound actually moving at tremendous speed, and producing light that is extending out into the farthest reaches of the universe. Perhaps then the aphorisms of spiritual masters like Yogi Bhajan will no longer seem strange and unattainable.

For more evidence-based research on the therapeutic value of chanting use our database on Chanting.

To learn more about the CymaScope and a related project Sayer Ji and John Reid are partnering on, take a look arc SystomeBiomed.com.

Try the kundalini mantra lesson below to directly experience the power of mantra.

Listen to one of my favorite mantras below: