Views 19430
Posted on:
Wednesday, December 19th 2018 at 5:15 am
Written By:
GMI Reporter
This article is copyrighted by GreenMedInfo LLC, 2018
Visit our Re-post guidelines

Ever since Pinterest abruptly banned GreenMedInfo from its platform on Dec. 13th, presumably for sharing research supporting natural medicine and questioning vaccine safety, the outpouring of support for GMI has been truly unprecedented. We urged concerned users to file a complaint with Pinterest, and in response a wave of GMI supporters posted that they have deleted their Pinterest accounts entirely in protest of the ban. One particular testimonial from a user named Katherine struck a chord with us and she gave us her permission to share it.

"I would like to lend my voice to say how disappointed I am that PINTEREST, of all sites, have censored GreenMedInfo and removed their account. I am sick to death of social media and other sites dictating what I can and cannot see having to do with health or alternative views, PARTICULARLY while violent and sexually explicit content remains free to view even by children. This is a shameful decision! Extremely and unbelievably disappointed"


For context, here are Pinterest’s accusations against us, as expressed most recently by one their representatives named Patrick, who responded to our appeal request as follows:

On December 15th, we "appealed" the Pinterest ban by filling out their online form. Here is there response: 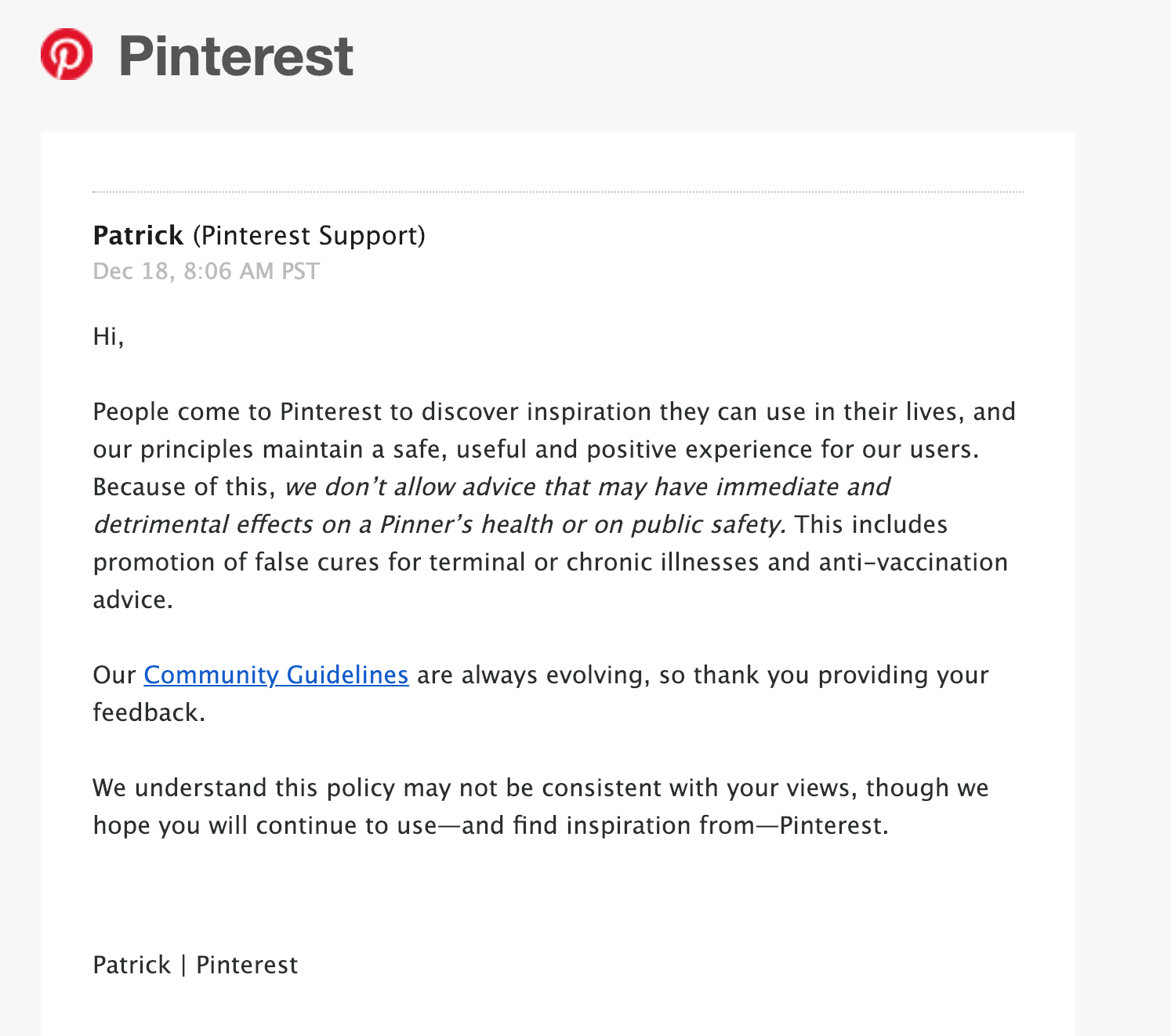 For the record, Patrick's accusation is false. We do not, and have never provided "anti-vaccination advice," nor do we "promote false cures for terminal or chronic illness." Our core advocacy revolves around informed consent, which requires open access to information, and the right to medical freedom. This is why we report on the research which indicates the potential therapeutic value of natural interventions, the unintended and adverse effects of vaccination, problems with vaccine efficacy, as well as many other subjects that are important to consumers. There are over 40,000 such studies on our database alone, which anyone in the world can access here.

In light of Pinterest’s accusations, namely, that GreenMedInfo information freely pinned and shared by Pinterest users is a threat to public health and safety, we wondered if Katherine’s allegation that Pinterest allows children to view sexually inappropriate and violent content is indeed true.

It turns out that Pinterest’s policies on providing access to pornographic material came under fire recently when the mother of a 13-year old said her son stumbled upon explicit images on Pinterest while looking up posts about video games. The mother, Stephanie, opined:

There are well-established public health safety reasons for establishing barriers between children and sexually inappropriate or otherwise adult-only material online. There are also plenty of threads by Pinterest users who, as concerned parents, have complained about their children having access to violent content, such as this testimonial:

I enjoy Pinterest sometimes to get ideas for birthday parties or decorating. I sat down at the computer with one of my kids and typed in "his and hers kids bathrooms" and a ton of photos of a woman murdered on the bathroom floor popped up, very disappointing.”

This is just the tip of a gruesome iceberg. You can do a causal search of Pinterest and find entire boards full of extremely graphic death scene images from murders, suicides, and accidents.

For example, Pinterest allows a "Faces of Death" board on their platform [WARNING: DO NOT CLICK IF CHILDREN ARE PRESENT]: Pinterest's Faces of Death 2. <<<< UPDATE: on Dec. 21st Pinterest removed this board, which we believe is a tacit acknowledgement of how profoundly inappropriate it is for children (and even adults) to view. As a working example of the extreme violence hosted by Pinterest, this even worse board is live as of now: Life/Death.

Since the 1960's, an extensive body of peer-reviewed research on the deleterious effects of childhood exposure to media violence has accumulated. One such review titled, "The Impact of Electronic Media Violence: Scientific Theory and Research," summarized this research as follows:

Despite the clear public health and safety threat to children represented by Pinterest's extremely permissive policies surrounding violent and pornographic content, Pinterest has chosen to ban all content from GreenMedInfo.  Why?

Pinterest operates as a social media site where users are able to directly and instantly contribute content to their platform.  Pinterest has standard content safeguards, such as the ability to report inappropriate and violent content, however it appears that they are unable to keep up with the sheer volume of submittals to protect everyone, at all times from inappropriate content. That said, the hypocrisy at play here is worth taking a moment to explore. Pinterest has defined GreenMedInfo's content as detrimental to public health and safety when in acutality our platform was developed to share research from peer-reviewed, published journals directly from the National Library of Medicine (take a look at all our ~ 50,000 articles and studies here). Yet the Pinterest platform provides access to graphically violent and sexually explicit material to minors, which is a real threat to public health and safety. We don't presume to know whether decison makers at Pinterest support current vaccination mandates unreservedly, however they have taken a stand against "anti-vaccination advice" which demonstrates an apparant political motivation behind the decision to ban GreenMedInfo without a meaningful appeals process or any specific examples of policy violations.

If Pinterest is going to censor content under the auspices of public safety, we expect them to put as much effort into keeping their platform clean as they do towards monitoring other sites. Regardless, we object to the accusation that GreenMedInfo threatens public health and safety by sharing scientific citations that challenge the dominant medical narratives of our time. We will continue to do so with or without access to the Pinterest platform.

How You Can Help

Thank you for your support! Without you, we wouldn't be here to serve anyone!