Views 908
Posted on:
Thursday, October 17th 2019 at 9:15 am
Written By:
GMI Reporter
This article is copyrighted by GreenMedInfo LLC, 2019
Visit our Re-post guidelines

There is a disturbing trend in news reporting in Florida on the vaccine exemption stripping bill introduced by Democratic Senator Lauren Book, SB 64 in August of this year which was recently falsely reported to have been withdrawn.

Another factually untrue and misleading story, published this month by the Tampa Bay Times and titled, “Florida is one of the least-vaccinated states, report says,” was immediately amplified by Senator Book with further distortions on her Facebook page as follows: 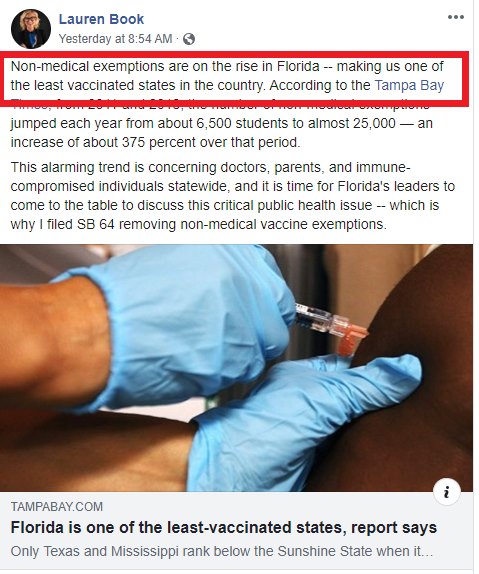 The story, however, is misleading at best. Dawn Richardson from the non-profit adovcacy organization The National Vaccine Information Center explains:

“The report Senator Book cites gives rating also based on adult and elderly vaccine statistics -- but she misleads and distorts by blaming childhood exemptions!

Florida actually ranks 28th for childhood vaccines in this report, but because Florida ranks dead last in ADULT AND ELDERLY vaccine rates, WHICH HAS NOTHING TO DO WITH CHILDHOOD EXEMPTIONS, and adult vaccine uptake is an equal factor in creating the ranking, it lowers the overall ranking significantly. It is disingenuous of Senator Book to cite childhood vaccine exemption numbers as the cause of being ranked last. What are her motives for distorting the truth? https://wallethub.com/edu/states-that-vaccinate-the-most/66237/#main-findings

Exemption rates are being misrepresented. An expanded bloated vaccine schedule is not accounted for in claims of rising of exemption numbers. Having an exemption doesn’t mean unvaccinated. Children today receive 69 doses of vaccines for 16 different viral and bacterial illnesses which more than doubles the government childhood schedule of 34 doses of 11 different vaccines in the year 2000. A vaccine exemption is filed regardless of whether the exemption is filed for one dose or all doses. 35 doses and 5 more unique vaccines have been added to the schedule in the last 19 years leading to more possibilities for an exemption. Don’t be fooled by those who incorrectly assume a student with an exemption is unvaccinated as most students with exemptions are partially vaccinated.”

Beginning early this year, the Tampa Bay Times started to put out highly polarizing and factually misleading articles on the topic, including an Aprill 22nd editorial calling for the abolishment of religious exemptions in Florida:

Is this just the personal opinion of the editorial staff, or is there a larger agenda behind this concerted push to alter public opinion in the immediate months before Senator Lauren Book introduced her bill on August 2nd?

It turns out that the Tampa Bay Times is owned by the Times Publishing Company, which is itself owned by the Poynter Institute for Media Studies. If this latter organization sounds familiar, it may be because in a investigative report from May of this year, we revealed that Poynter is funded by the Bill and Melinda Gates Foundation. Bill Gates is now notorious for vociferously dehumanizing the parents of vaccine injured parents who question vaccine safety by saying that, “the people who engage in those anti-vaccine efforts, they kill children.” [Minute 1:29 in the video below]

This same rhetoric is being applied to those who wish to exercise their medical and health freedoms, and who decline some or all vaccinations. This is also true of those who are refusing to support Senator Book’s bil, SB 64, which would reproduce the situation in California, where not only can you not obtain a religious exemption to vaccination, but even children who have had life-threatening reactions to vaccines may still not be granted a medical exemption through the State-governed medical exemption review panel which has now replaced the doctor-patient relationship.

This is part of a disturbing trend throughout this country to marginalize, attack, and essentially dehumanize those who wish to assert their First Amendment rights, or who simply wish to dialogue or point out the vast body of peer-reviewed literature, as well as government programs designed to compensate victims of vaccine injury, indicating that vaccines are not unilateraly, unequivocally, and absolutely "safe and effective" as the mainstream media and government health agencies continually assert. Learn more about this disturbing trend by reading: Vaccine Extremism, Hate Speech, and the Well-Beaten Path Towards Genocide

Join grassroots organizations to continue to organize and protect basic human rights and medical freedom in Florida, and nationally.