The Ultimate Paleo Diet Plan to Transform Your Health

Views 73
Posted on:
Wednesday, December 3rd 2014 at 11:45 am
Posted By:
GMI Reporter
This article is copyrighted by GreenMedInfo LLC, 2014
Visit our Re-post guidelines You've probably heard about the paleo diet, the lifestyle switch that's taken America by storm. Paleo has fast begun the most popular diet to have ever held sway over our love handles. People all over the world are having massive success following a fairly simple switch in diet and many consider paleo to be more than just a diet, it's become a lifestyle choice.

The paleo lifestyle is aligned with how our hunter-gatherer ancestors ate and lived for thousands of years. It is the only nutritional system which works with our genetics to enable us to stay lean and energized.

The present Standard American Diet (SAD) is loaded with foods that we haven't biologically adapted to process (1)(2)(3).

Experts agree that a diet high in processed and refined carbohydrates and sugars is the leading cause of chronic degenerative disease (4).

"Let food be thy medicine and medicine be thy food."

The paleo lifestyle adheres to this principle that Hippocrates put forth. Many people following this way of eating have cured their diabetes (5), skin problems (6), depression (7), arthritis (8) and even Alzheimer's (9) just to name a few.

So what exactly is the paleo diet? How can it help you not only to lose weight, but also to fight inflammation and heal your digestive tract?

Why do some people seem to be so against it and where did this seemingly new yet absolutely ancient way of eating even come from?

The Ins and Outs of Paleo

It's safe to say we can't go back in time. We can't all decide to be hunter-gatherers, the natural resources of our planet have been pillaged and transformed.

The paleo lifestyle isn't about going back to archaic ways of living. We have the technology today to replicate the diet of our ancestors without hunting wild boar for dinner and eating pemmican for dessert.

Traditional diets are drastically different between societies, though generalities do exist. It's these generalities that we will be focusing on.

Adaptation is a complex process, humans have yet to evolve to digest the grains and legumes of agricultural invention (10). Researchers of the hunter-gatherer peoples around the world have found that they have none of the diseases which plague humanity today (11)(12).

Obesity, diabetes, cardiovascular disease and hypertension are just some of the issues we face today that are largely caused by our modern diet.

Choosing a lifestyle more aligned with our evolution only makes sense to regulate these diseases.

Is Paleo For Me?

The Paleo diet is for anyone interested in achieving a better quality of life. You don't have to be on a mission to lose weight in order for paleo principles to benefit you.

The desire to live a long healthy life, free from degenerative disease is reason enough to switch to a paleo lifestyle.

For people suffering from diabetes, high cholesterol, obesity, depression/anxiety, low energy, hormonal issues, auto immunity and digestive issues, switching to the paleo diet can be a lifesaver.  Simple switches to products like coconut oil can make all the difference and you can still eat delicious foods.

There's more to it than just diet however, that's why many people refer to paleo as being more of a lifestyle. The goal is to realign with our predecessors not just in how they ate, but also how they moved and lived (13).

Many people who practice a paleo lifestyle incorporate primal movements like cross fit, a blend of high intensity interval training and weight training. Even something as simple as walking more is part of the paleo lifestyle.

Excessive sitting, distinctly different from too little exercise, is a fairly new evolutionary problem. Of course humans haven't had much chance to sit in the distant past and nowadays the repercussions of this simple act are becoming apparent (14).

Paleo is all about doing what we are biologically and genealogically equipped to do. Most of us feel like we could feel better, look better and generally that we aren't living up to our highest potential.

The paleo lifestyle can help us unlock optimal health.

The USDA food pyramid is what most health professionals base their dietary recommendations on. We've been convinced that these are "healthy" food choices simply because the government told us so.

Behind the scenes there is one large motivating factor the government has standing behind their food recommendations and it is profit. Every year the government spends billions on farm subsidies (15), they need to make a profit so they must ensure people are eating these foods.

Even though the evidence shows grains to be nutritionally lacking, the USDA recommends up to 300g of carbohydrates per day, to consume this amount of carbohydrates from vegetables alone would be nearly impossible.

In the book, "Death by Food Pyramid" by Denise Minger, she highlights the bias government agencies have with regards to their nutritional recommendations:

"The Academy of Nutrition and Dietetics (formerly the American Dietetic Association), for instance, has a long list of corporate sponsors including General Mills, Kellogg's, Mars, PepsiCo, and SoyJoy—and its 'official partners' include Hershey's, the Coca-Cola Company, and the National Dairy Council."

Why Are Grains and Legumes Bad for You?

Often referred to as "anti-nutrients", phytates or phytic acid bind to important minerals such as zinc, magnesium and calcium in the gut and remove them from our bodies (16).

Non-ruminants lack the enzyme to properly break down phytates, thus making foods which contain them extremely difficult to assimilate.

On the bright side soaking or fermenting grains and legumes helps to break down the phytates, however this isn't a common practice, especially when it comes to processed foods.

Studies also show lectins lead to leptin resistance which turns off our brains capacity to signal when we've had enough to eat, thus leading to overeating and exacerbating metabolic syndrome (18).

A composite of the proteins gliadin and glutenin, gluten intolerance also known as celiac disease is on the rise. It seems so sudden that grocery stores carry all sorts of gluten free products and the media is beginning to cover the dangers of gluten.

Studies are being release showing elimination of gluten to have beneficial effects in treating diabetes (19), cognitive function (20), and improved digestion (21).

Even people who haven't been diagnosed with celiac disease could have gluten sensitivities, 29% of non-celiacs tested had Anti-gliadin IgA present in their stool, an anti-body your body produces because it sees gluten as a foreign invader.

Why Should I Avoid Dairy?

The list of dairies negative health effects goes on and on. First, let's remember when milk is the number one most common food allergy in the U.S., this tells us something.

Commercial milk production is a frightening scene, modern cows are fed genetically modified grains (when they evolved to eat grass), injected with growth hormone so that they produce more milk and often given antibiotics because the feed lots are downright unclean.

The most common misconception surrounding dairy is its importance in protecting against osteoporosis. The calcium in milk, in fact, does more damage than good (22).

Harvard did a meta-analysis of 170,000 women and 68,000 men and found that high calcium intake was not associated with lower incidence of hip fracture (23).

What are the Health Benefits of the Paleo Diet?

Weight loss (24) - Most people adopt the paleo diet for this reason, and there's no doubt about it, paleo is a great way to achieve lasting results.

Treating Diabetes (25)(26) - The evidence that paleo can drastically help and even cure both type 1 and 2 diabetes is jaw dropping. With rates of diabetes skyrocketing the paleo diet could be our answer to a serious problem.

Treating Cardiovascular Disease (27) - Heart disease is the leading cause of death in the U.S. Eating a diet rich in whole foods, healthy fats and lean proteins has been proven to reduce the risk of heart disease and increase quality of life.

Treating Autoimmunity (28) - Although there haven't been many studies done on how the paleo diet effects autoimmune disorders, there is no lack of anecdotal evidence.

There's even a specific subset of the paleo lifestyle called autoimmune protocol which stands by paleo principles yet focuses on healing the gut micro biome and reducing inflammation.

Where Do I Start? 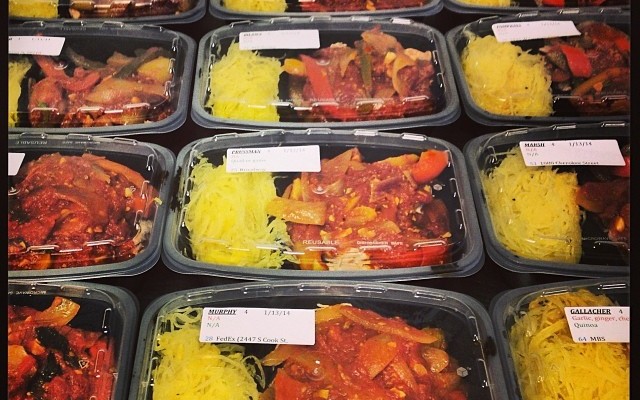 You'll want to start by cleaning out your fridge and pantry of all non-paleo friendly foods. It's likely this will result in a total kitchen upheaval.

Be prepared to start fresh, check out this thorough guide for paleo staple foods to stock your pantry, fridge and freezer. Some people feel confident they can jump in 100 percent, others want to take a slower approach.

Go easy on yourself, it can be challenging making the switch to a new way of eating.  In fact taking small steps like drinking warm lemon water, or incorporating apple cider vinegar into your diet can be a stepping stone to healthier living.

I recommend incorporating one fully paleo meal per day and slowly increasing that. Always have lots of healthy snack on hand like nuts, seeds, dried fruits, beef jerky for those moments when you get cravings.

Ensure that you're eating adequate amounts of healthy fats from foods like avocado, olives, bacon (yes, bacon) and fish, these fats will help stabilize your blood sugar levels and alleviate cravings.

One of the best ways to kickstart weight loss and address common underlying food allergies, is to follow the Whole 30 plan. This system adheres to paleo guidelines and takes out all foods which may be addictive and potentially harmful.

Doing the Whole 30 is basically like pushing the reset button. It's reassuring because it's only 30 days and you can eat as much as you want as long as you stick to the listed foods.

The emphasis is on whole foods and removing absolutely all junk. They advise you to not step on the scale or measure yourself until your finished the program, because it's not about the numbers, it's about how you feel.

Some great websites from the experts surrounding the paleo lifestyle. They go over the science behind paleo and many of them have a success stories section.

If you want to learn more about eating paleo then consider reading one of these great books.

There are some great paleo recipe websites out there.