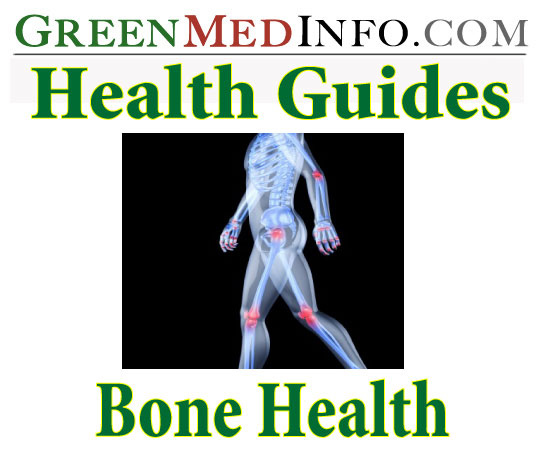 This section collates research and information relevant to osteoporosis and osteopenia prevention and/or treatment, with a focus on bone fracture risk reduction. It is designed to provide our users with the first-hand research on conventional medical interventions and possible natural alternatives, without which an informed choice is not possible.

Confirmed: The Lower Your Bone Density, The Lower Your Breast Cancer Risk
Written by Sayer Ji, Founder
When older women are told that their bones should be as dense as a young adult (30 year old) at peak bone mass, things can and DO go terribly wrong...

The Manufacturing of Bone Diseases: The Story of Osteoporosis and Osteopenia
Written by Sayer Ji, Founder
The present-day definitions of osteoporosis and osteopenia were arbitrarily conceived by the WHO in the early 90's and then projected upon millions of women's bodies seemingly in order to convince them they had a drug-treatable, though symptomless, disease

Osteoporosis Is Scurvy of the Bone, Not Calcium Deficiency
Written by Suzanne Humphries, MD
It saddens me to see older women diagnosed with "osteopenia" or "osteoporosis" listening to their doctors and taking supplemental calcium and even problematic drugs called bisphosphonates. These are irrational, dogmatic, harmful approaches to the problem of degrading bone as we age

Got Prunes? Drop the Milk for This Exceptional Bone Builder
Written by Margie King, Health Coach
Milk is the best food for building strong bones, right? Not so fast. When it comes to bones, one researcher says prunes are exceptional.

Spicing Up Your Hormones Without Hormone Replacement
Written by Sayer Ji, Founder
The human fascination with spices is as old as cultural time itself. There is an obvious beauty to the various aromas and flavors these plant extracts express (have you smelled cumin lately?), and undoubtedly these first drew us closer to them, but our primordial relationship with them involves much more than aesthetic infatuation

How Too Much Calcium Can Break Your Bones
Written by Sayer Ji, Founder
Did you know that most calcium supplements on the market are basically limestone? Yes, that's chalk. Conceal it within a capsule, a slickly glazed tablet, or in the form of a silky smooth liquid, and it is magically transformed into a "calcium supplement": easy to swallow, “good for the bones" and a very profitable commodity for both the dietary supplement and mining industries. After all, a sizable portion of the Earth's crust is composed of the stuff.

The Calcium Supplement Problem: As Serious as a Heart Attack
Written by Sayer Ji, Founder
Osteoporosis is not caused by a lack of limestone, oyster shell or bone meal. Heart attack, however, may be caused by excess consumption of exactly these "elemental" forms of calcium, according to two high-powered meta-analyses published last year in the British Medical Journal

Why Most Calcium Supplement Recommendations are DEAD WRONG
Written by Sayer Ji, Founder
Millions take calcium supplements to "protect their bones" completely unaware that this popular ritual is greatly increasing the risk of cardiovascular disease, including heart attack and stroke.