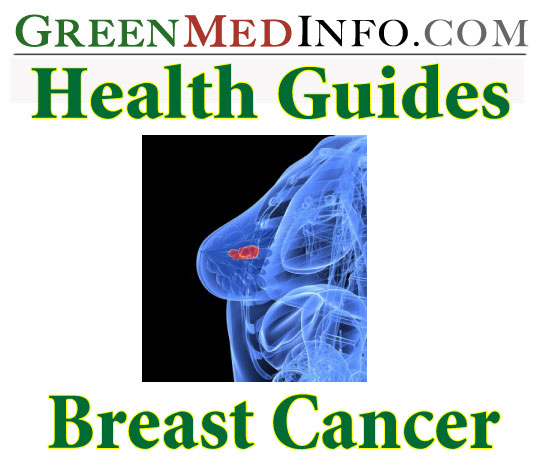 This section collates research and information relevant to natural breast cancer treatment. It is designed to provide our users with the first-hand research on conventional medical interventions and possible natural alternatives, without which an informed choice is not possible.

Effects of Green cardamom (Elettaria cardamomum Maton) and its combination with cyclophosphamide on Ehrlich solid tumors.

Did Angelina Jolie Make A Mistake By Acting On The 'Breast Cancer Gene' Theory?
Written by Sayer Ji, Founder
Angelina Jolie’s recent announcement in a New York Times op-ed that she had a ‘prophylactic’ double mastectomy due to her BRCA1/BRCA2 status has disturbing implications, some of which we covered late last year in connection with Allyn Rose, the 24-year old Miss American contest who announced she would be undergoing a double mastectomy to "prevent" breast cancer.

500 Reasons Turmeric May Be the World's Most Important Herb
Written by Sayer Ji, Founder
There is a medicinal spice so timelessly interwoven with the origins of human culture and metabolism, so thoroughly supported by modern scientific inquiry, as to be unparalleled in its proven value to human health and well-being

600 Reasons Turmeric May Be the World's Most Important Herb
Written by Sayer Ji, Founder
There is a medicinal spice so timelessly interwoven with the origins of human culture and metabolism, so thoroughly supported by modern scientific inquiry, as to be unparalleled in its proven value to human health and well-being

Research: Curcumin is a Triple Negative Breast Cancer Killer
Written by Sayer Ji, Founder
A study from Zheijian Provincial People's Hospital in Zheijiang, China indicates that a compound in turmeric known as curcumin, which gives the spice its characteristic saffron-like color, is capable of inducing cell death within triple negative breast cancer cells