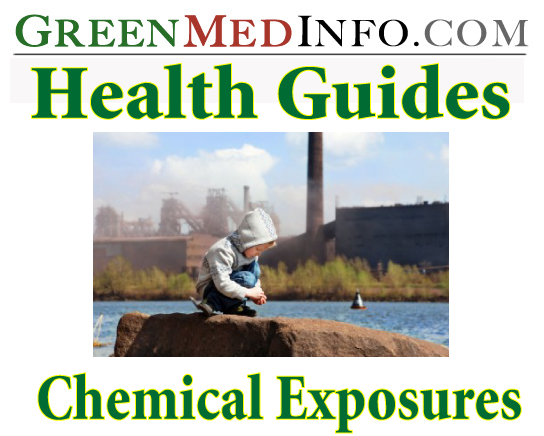 This section collates research and information on the unintended adverse effects of various chemical exposures, as well as first-hand research relevant to mitigation and detoxification strategies.

Protective effects of chrysin against the neurotoxicity induced by aluminium.

USDA Organic Infant Formula Contains Pesticide Labeled As A "Nutrient"
Written by Sayer Ji, Founder
The USDA organic label is supposed to protect the consumer against being exposed to harmful chemicals and GMOs, but the sobering fact is that USDA-certified infant formula products are not only being allowed to use a pesticide in their formulas, but are advertising it as a 'healthy' mineral to unsuspecting consumers.

GMOs and Health: The Scientific Basis for Serious Concern and Immediate Action
Written by Nathan Daley, MD, MPH
You might ask, "why all the fuss about agricultural genetically modified organisms (GMOs)?" After all, regulatory agencies have approved these technologies for widespread application and consumption, so they must be safe, right? Well, the truth is that there is no agency and no industry that works to protect our health. At best, the EPA, USDA, and FDA attempt to respond to our disease after the cause is widespread.

Has Drug-Driven Medicine Become a Form of Human Sacrifice?
Written by Sayer Ji, Founder
Benjamin Rush accurately foretold a grave possibility facing Americans today, namely, that the art and science of healing be restricted to a select class of allopathic physicians, who have the sole legal right to recommend and administer medicines, and whose pharmacopeia excludes – as a matter of principle – all the healing foods, vitamins and herbs which have been used safely and effectively for countless millenia in the prevention and treatment of disease

Pesticides May Increase Risk of ADHD in Children
Written by Margie King, Health Coach
Young children are most susceptible to the toxins in pesticides which increase their risk of ADHD. Protect them by buying organic foods.

Is Your Multivitamin Toxic?
Written by Sayer Ji, Founder
In episode #11 (season 2) of CSI: Crime Scene Investigation, a woman poisons her husband with the chemical sodium selenite. Strange as it may sound, this exotic murder weapon, and it’s close cousin, sodium selenate, are listed as "nutrients" on the labels of most mass-marketed vitamins. Even though both sodium selenite and selenate are classified as dangerous and toxic to the environment

Can Fluoride Lower Human Intelligence?
Written by Sayer Ji, Founder
If those who believe that fluoride doesn’t “make you stupid” (i.e. lower IQ) let themselves be exposed to it, or willfully consume it for its “health benefits,” doesn’t that prove the point? Could their fluoride-exposed brains and bodies lack the discernment needed to ascertain the dangers of such exposure?

Failing Our Weakest Newborns: Poisoning with Aluminum
Written by Heidi Stevenson
In this first report from the Keele Conference on the biological effects of aluminum, we learn that the weakest among us, premature newborns and sickly elderly, are being poisoned with aluminum through their nutrition. The FDA’s aluminum limits are routinely ignored, while this problem, known for 30 years, continues unabated.

Crude Awakening: Mineral Oil Contaminates Everyone's Bodies
Written by Sayer Ji, Founder
Mineral oil is everywhere these days: in our food, in our cosmetics, and in our drugs. But did you know it is also accumulating in our organs and that you can do something about that?

Is Monsanto's Herbicide Harming Male Fertility?
Written by Sayer Ji, Founder
In a disturbing study published in the Journal of Toxicology in Vitro, researchers found that Monsanto's popular "weed killer" known as Roundup, which has already been linked to over 25 adverse health effects, is also capable of interfering with and/or harming the male reproductive system