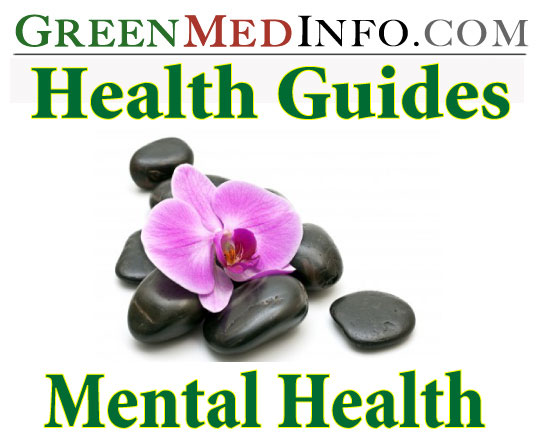 This section collates research and information relevant to mental health. It is designed to provide our users with the first-hand research on conventional medical interventions and possible natural alternatives, without which an informed choice is not possible.

This study discusses neuroinflammation and highlights a study showing that that typhoid vaccination, but not placebo, caused an increase in circulation IL-6 that correlated with mild dysphoria as well as increased activation of subgenual cingulate cortex.

23 Natural Alternatives for Depression
Written by Pat Robinson
Kava is safe and effective in treating anxiety disorders and depression. L-tryptophan is as effective as imipramine in treating depression. Saffron may be of therapeutic benefit in the treatment of mild to moderate depression and has similar efficacy as the drug imipramine. St. John's Wort is as effective as Selective Serotoin Reuptake Inhibitors (SSRI) in the treatment of Depressive Disorder, with a greater safety rating.

Can Wheat Drive More Than Your Digestive System Crazy?
Written by Sayer Ji, Founder
Wheat could be driving more than your digestive system crazy. While wheat is well known to wreak havoc on the gastrointestinal health of genetically susceptible folks, such as those with celiac disease, and more recently, irritable bowel syndrome, new research published in the journal Psychiatry Research indicates that sensitivity to one of the components in wheat known as gliadin could be driving some into states of acute mania.

Saffron: Ancient Healing Powers Confirmed by Science
Written by Sayer Ji, Founder
Clearly there is something magical about the Crocus sativus flower, from which the spice saffron is derived. If its striking beauty does not immediately cast a spell on its beholder, often it simply takes experiencing the spice to fall into full enchantment with it.

Fluoride Literally Turns the Pineal Gland to Stone, Research Suggests
Written by Sayer Ji, Founder
The pineal gland has been known as the 'seat of soul' for hundreds of years. Could fluoride, a ubiquitous vector of toxicity in the modern world, actually be calcifying this gland and literally turning it to stone?

Wheat: A Missing Piece In the Autism Puzzle
Written by Sayer Ji, Founder
People often balk at the concept that a gluten-free diet may improve the condition of autistic children. For so many who have tried it, the proof is not in academic publications but in the (gluten free) pudding. Nothing is more compelling than seeing improvement with your own eyes, not even a randomized, double-blinded clinical trial.

How Stress, Magnesium and Disease Are Linked
Written by Dr. Mark Sircus
In the Age of Toxicity one of the most common deficiencies and most life-threatening is magnesium. The good news is that it is easy to remedy...

61 Health Benefits of Omega-3 Fatty Acids
Written by Pat Robinson
Few foods have such a depth of clinical human research supporting their use in the prevention and mitigation of disease as omega-3 fatty acids. In this review, 61 of the most compelling are highlighted by Pat Robinson, the founder of Heal Thyself!

One Hour of Light Therapy Reduces Depression
Written by Case Adams, Naturopath
Researchers from the University of Maryland’s School of Medicine have determined that just one hour of bright light therapy significantly reduces depression and depressed moods.

Are Mental Disorders the Result of Neuroinflammation?
Written by Case Adams, Naturopath
New research is increasingly finding that not only are many cognitive disorders such as Alzheimer's and other forms of dementia related to inflammation among brain tissues, but classic mental diseases such as schizophrenia and depression may also be connected to brain inflammation.