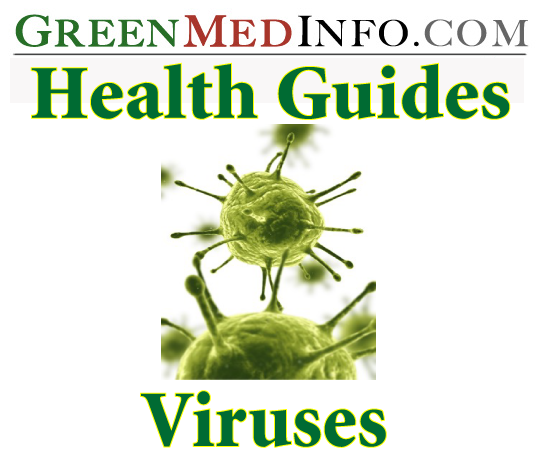 This section collates research and information relevant to viral infections. It is designed to provide our users with the first-hand research on conventional medical interventions and possible natural alternatives, without which an informed choice is not possible.

Role of sialylated glycans on bovine lactoferrin against influenza virus.

FDA Approves Neurotoxic Flu Drug For Infants Less Than One
Written by Sayer Ji, Founder
The recent decision by the FDA to approve the use of the antiviral drug Tamiflu for infants as young as 2 weeks old, belies an underlying trajectory within our regulatory agencies towards sheer insanity.

Hep B Vaccine Damages the Liver it is Supposed to Protect
Written by Sayer Ji, Founder
Startling research published in the journal Apoptosis indicates that hepatitis B vaccine, which is designed to prevent Hepatitis B virus-induced damage to the liver, actually causes liver cell destruction

Licorice Shown to Kill SARS and Other Lethal Viruses
Written by Sayer Ji, Founder
Licorice has a rich and ancient history of use as a medicine, being rooted in Indian, Chinese, Greek and Egyptian traditions, alike. Technically a legume, related to beans and peas, its sweetness results from the presence of glycyrrhizin, a compound 30-50 times sweeter than sugar. This compound is what gave licorice its name, which derives from the Greek word γλυκύρριζα (glukurrhiza), meaning "sweet” (gluku) "root" (rrhiza)

Say No to Thimerosal, Say No to the Flu Vaccine
Written by Dr. Mark Sircus
Saying no to vaccines in the face of the gale wind of propaganda and governmentally supported vaccine campaigns is high treason punishable to the point of having your kids taken away if you happen to be in the wrong place at the wrong time.

Can Cinnamon Oil Fight This Winter's Microbial Assault?
Written by Anne Gordon, RN
It appears that prevention is the key to avoiding illness. You've heard it over and over. Get a flu shot. However this year there are some many new emerging virulent strains. For instance, there are several different influenza strains. The flu shot does not cover all of them...and is not highly effective according to many researchers.

Rotavirus Vaccines Still Contaminated With Pig Virus DNA
Written by Sayer Ji, Founder
A new investigation into “pig virus” contamination in human vaccines has revealed that both circovirus type 1 (PCV1) and 2 (PCV2) DNA are still present in vaccines developed against infant and childhood rotaviral gastroenteritis (RG), and which since 5 June, 2009, the World Health Organization has recommended be included in all national immunization programs. As a parent how do you feel about that?

38 Natural Alternatives for HIV
Written by Pat Robinson
Fortunately, natural substances are being researched for their therapeutic value for our immune health. "Superbugs" develop due to repeated, frequent and multiple different antibiotic prescriptions. Plant products have historically been consumed and utilized for their anti-microbial and holistic benefits. Here are 38 natural substances which indicate potential benefit for people with HIV.

Homeopathy In A Brand New World of Species-Jumping Diseases
Written by Debby Bruck
Living In A Brave New World. Phlebovirus is one of five genera of the family Bunyaviridae, that typically uses the sandfly as a vector for spreading disease. Could this virus jump into a new species, the tick? They can survive, but can we? A different approach to healing through homeopathy.