[The second part of this article entitled "Opening Pandora's Box: The Critical Role of Wheat Lectin in Human Disease" can be viewed here]

[View the growing list of Diseases linked to wheat consumption in the biomedical literature here.]

A critically acclaimed internet classic, The Dark Side of Wheat is now available to own as a downloadable document exclusively from GreenMedInfo.com. It includes two hard-hitting essays that represent a seachange in the way wheat intolerance is comprehended; no longer a rare, strictly genetically-based disease, wheat is revealed to be a species-specific intolerance, whose role in health and disease has been greatly misunderstood since ancient times. The downloadable document also includes a 90-page quick reference guide containing hyperlinks to research on the National Library of Medicine on over 120 diseases that have been linked to wheat consumption.

The Dark Side of Wheat has changed many minds about the exalted status of wheat among secular and sacred institutions alike.

As Dr. Ron Hoggan, co-author of "Dangerous Grains" puts it in the foreword: "Sir Isaac Newton's famous metaphor (perhaps quoting others) said something to the effect that we see further, not because of any special endowment of our own, but because we are standing on the shoulders of giants. After reading Sayer's work on wheat, I felt as if I had just been boosted to a higher plane from which I could see and understand much, much more. Sayer's insights continue to shape and inform much of my effort to understand the various impacts of grains on human health." 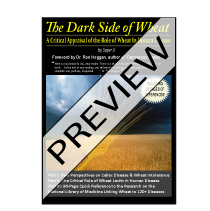 Click here to read a sample of this document.

3 Antibody testing for gliadin, tissue transglutaminase and endomysium indicates that "silent" or "latent" celiac disease is up to a 100 times more frequent than represented by the classical form.

17 "The origins of agriculture ? a biological perspective and a new hypothesis" by Greg Wadley & Angus Martin, Australian Biologist 6:96- 105, June 1993

21 Insulin-mimetic actions of wheat germ agglutinin and concanavalin A on specific mRNA levels. Archives of Biochemistry and Biophysics 1987 Apr;254(1):110-5.  [the 2nd part of this article entitled "Opening Pandora's Box: The Critical Role of Wheat Lectin in Human Disease" can be viewed here]